ESP32 is a prototyping board that is the work of the Shanghai-based company Espressif Systems. It incorporates the ESP32, a microprocessor tailored toward wearable electronics and IoT. It boasts integrated Wi-Fi and Bluetooth, along with an array of inbuilt antenna switches, and ultra-low power consumption. The company released the ESP8266 chip in 2014. Costing only a few dollars, this small chip is able to bridge an Arduino with a WiFi network, solving many issues that early IoT pioneers experienced.

It captured the attention of many talented engineers, who got it to co-operate with a range of programming environments, including Arduino. Within a few months, it's popularity started rising. This is ESP WROOM 32/ ESP32 WiFi-BT-BLE MCU Module. ESP WROOM 32 is a powerful, generic WiFi-BT-BLE MCU module that targets a wide variety of applications, ranging from low-power sensor networks to the most demanding tasks, such as voice encoding, music streaming, and MP3 decoding. At the core of this module is the ESP32 chip, which is designed to be scalable and adaptive. There are 2 CPU cores that can be individually controlled or powered, and the clock frequency is adjustable from 80 MHz to 240 MHz.

The user may also power off the CPU and make use of the low-power coprocessor to constantly monitor the peripherals for changes or crossing of thresholds. ESP32 integrates a rich set of peripherals, ranging from capacitive touch sensors, Hall sensors, low-noise sense amplifiers, SD card interface, Ethernet, high-speed SDIO/SPI, UART, and I²C.

Using Bluetooth, users can connect to their phone or broadcast low energy beacons for its detection. The use of Wi-Fi enables a large physical range, as well as a direct connection to the internet via a Wi-Fi router. Perfect for wearable electronic or battery-powered applications, the ESP32 chip uses less than 5µA. In addition, this module can support data rates of up to 150 Mbps and 22 dBm output power at the PA in order to allow for the widest physical range. 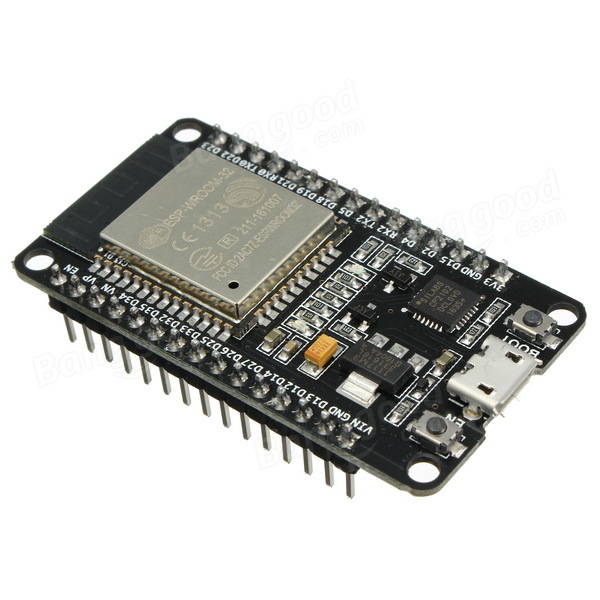 The ESP8266 does have a few downsides though: it has a small number of GPIO pins, only a few A/D converters, and it's under-powered.

These issues were addressed by the chip’s successor, the ESP32, which was launched in 2016. It brought with it an improved spec sheet and the ability to easily connect with external microcontrollers.

The central processor is a 32-bit Tensilica LX6 dual-core, clocked at 240Mhz. You’ll get just over 500kb of memory to play with, along with support for external flash drives.

Wireless connectivity comes in the form of BLE Bluetooth and 802.11 b/g/n WiFi, bundled with a robust set of cryptographic hardware tools.

In addition, there’s an ultra-low-power processor that’ll perform certain functions while the device is in deep sleep, which makes the ESP32 an excellent match for battery-powered projects. 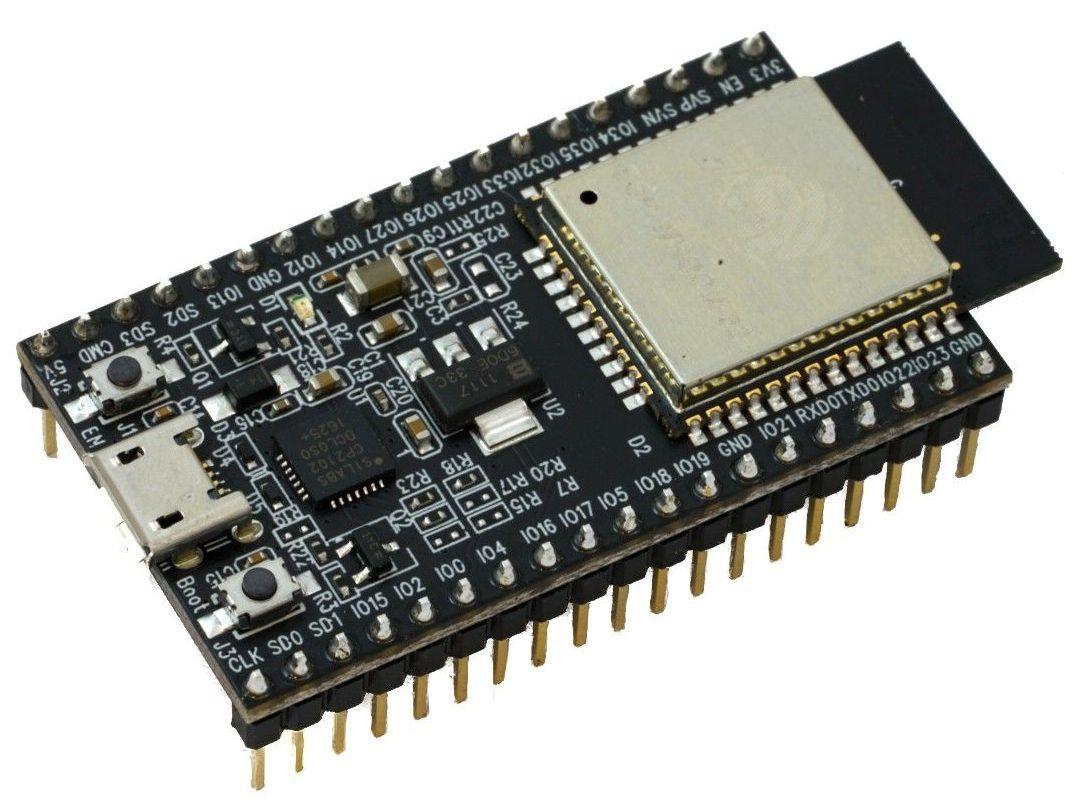 Unlike the Arduino UNO for example, the ESP32 DevKit pinout has been designed to slot directly into a breadboard and has 32 I/O pins.

This means you can basically plug it into the center of your breadboard and you’re ready to build a circuit around it. You’ll be able to plug it into your computer via a micro-USB socket at the far end, and there are two buttons on the top: one for resetting the device, the other for programming.

Being housed within a QFN package, the ESP32 microcontroller boasts enormous connectivity while still being compact and lightweight.

While it’s nowhere near as well-followed as the Arduino, it’s attracted attention thanks to the niche filled by its predecessor. There’s a significant community out there, and with Arduino IDE compatibility it’s easy to get started.

If you want to design a circuit using ESP32 dev kit, you can either type esp32 into the search box, or click on the "controllers" tab and locate it. After you find it, simply drag and drop it into the canvas. Alternatively, you can click on the ESP32 DevkitC icon and then click ‘swap’. This will replace the Arduino with the ESP32 dev kit. You can then add components in the same way that you would with the Arduino; wiring, supplementary components and breadboards will be added automatically. 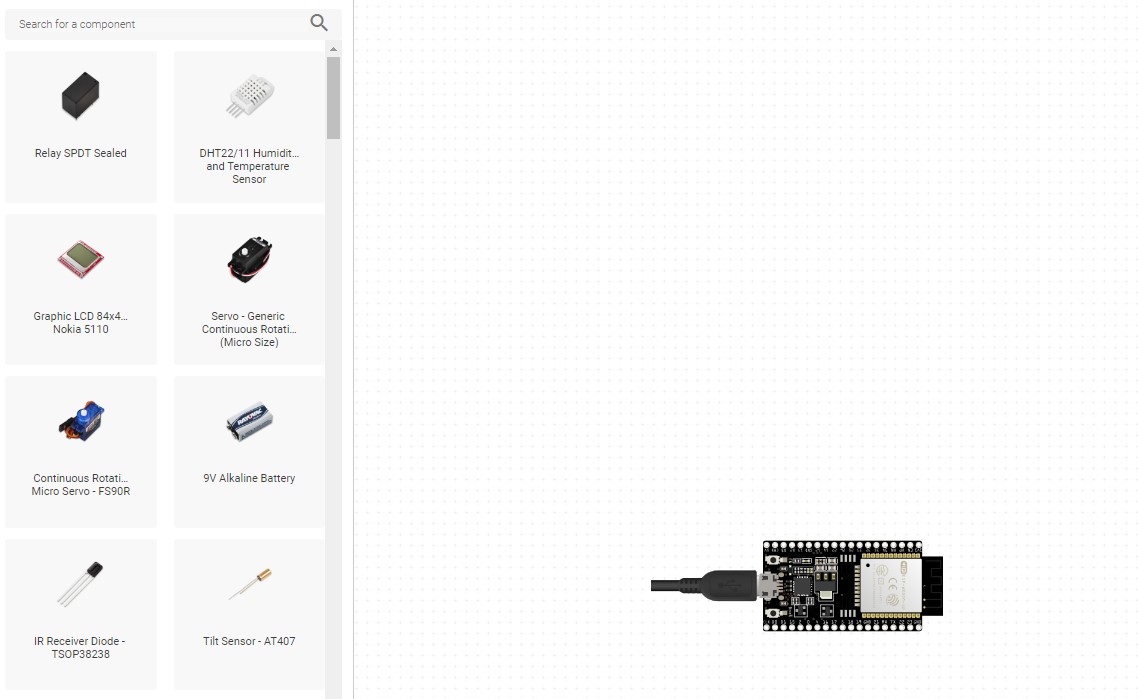 For example, if you’d like to wire up a 64-pixel dot-matrix display, you can simply drag it into position. As you can see, all the wiring and logic conversion is automatically taken care of for you. 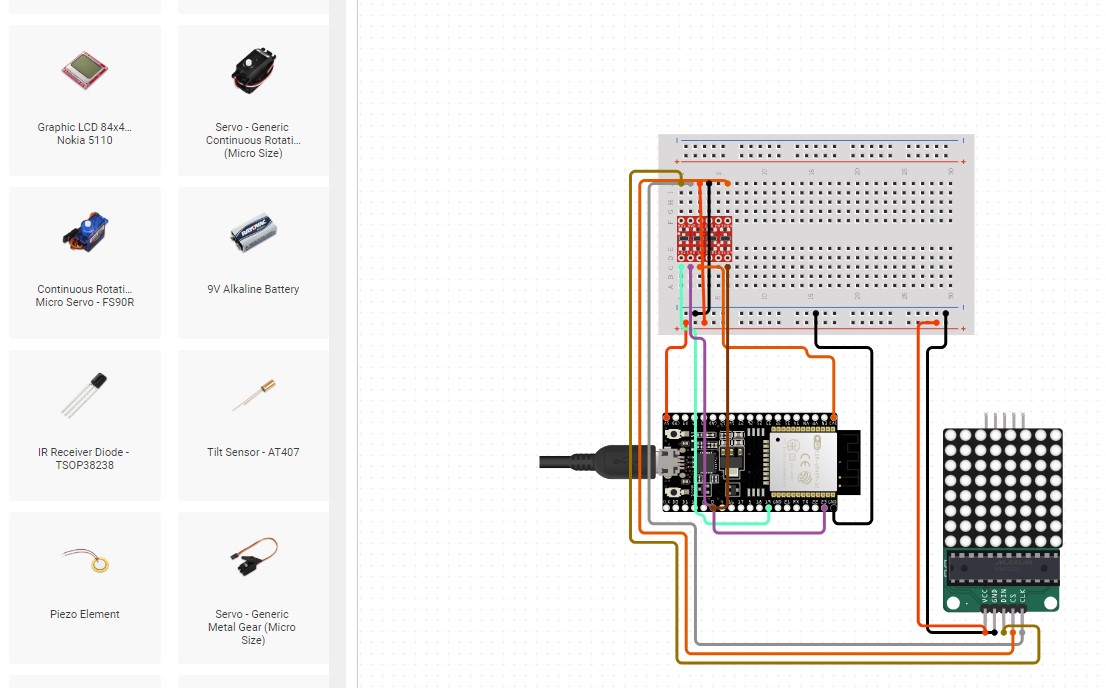 * The ESP32 dev kit is currently in Alpha version on circuito.io, meaning it's not been fully tested by our team yet, and there is also no test code for it at the moment.