If you’ve got a laptop computer or a cellphone that flips open like a clamshell, you’ve probably noticed that it senses when you open and close it and switches on or off accordingly. But how does it know Some kind of switch wired to the hinge so it can detect the opening and closing movement If that’s what you think, you’re at least half right! Think about it more carefully and you’ll see a standard switch would be quite tricky to wire up in that way—and probably quite unreliable too: all that opening and closing would quickly wear it out. So, instead, many laptops and phones use an inexpensive and very reliable device called a reed switch that turns on or off when a magnet is nearby. Intruder alarms and model railroads often use them too. Let’s take a closer look at how they work!

Reed switches come in two main varieties called normally open (normally switched off) and normally closed (normally switched on). The key to understanding how they work is to realize that they don’t just work as an electrical bridge but as a magnetic one as well: magnetism flows through them as well as electricity.

As you bring a magnet up to the reed switch, the entire switch effectively becomes a part of a “magnetic circuit” that includes the magnet (the dotted line in the artwork shows part of the magnetic field). The two contacts of the reed switch become opposite magnetic poles, which is why they attract and snap together. It doesn’t matter which end of the magnet approaches first: the contacts still polarize in opposite ways and attract one another. A reed switch like this is normally open (NO) (normally off), unless a magnet is positioned right next to it, when it switches on, allowing a current to flow through it.

Take the magnet away and the contacts—made from fairly stiff and springy metal—push apart again and return back to their original positions.

You can also get reed switches that work the opposite way: the two contacts are normally snapped together and when you bring a magnet up to the switch, spring apart. Reed switches like this are called normally closed (NC) (normally switched on), so electricity flows through them most of the time. The easiest way of making one is to take a normally open switch and fix a magnet permanently to its glass case, flipping it over from its open to its closed state (as in the second frame in the normally open animation up above). This entire unit (normally open reed switch with magnet attached) becomes our normally closed reed switch. If you bring a second magnet up to it, with a magnetic field of opposite polarity to that of the first magnet, this new field cancels out the field of the first magnet so we have, in effect, exactly what we had in the first frame of the normally open animation: a reed switch with two contacts sprung apart.

In these two artworks, I’ve massively exaggerated the movement of the contacts. Real reed switches have contacts that are only a few microns (millionths of a meter) apart—roughly ten times thinner than a human hair—so the movement isn’t visible to the naked eye. Don’t expect to see the blades moving as you bring your magnet up close! 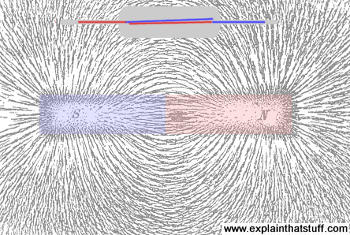 Artwork: The key to understanding reed switches is to realize that they are part of a magnetic circuit, as well as an electrical one: the magnetic field from the bar magnet is carried through the reed switch. That’s what makes it close—and that’s what allows electricity to flow through it. Magnetic field artwork sourced from Wikimedia Commons.

Another crucial thing I need to point out is that reed switches don’t simply switch on when a magnet moves up close and off when it moves away (in the case of a normally open/off switch): they will typically switch on and off several times as the magnet moves by, creating multiple on and off zones. They’ll also respond differently according to the orientation of the magnet (whether it’s parallel to the switch or perpendicular), what shape it is (because, as we all learned in school, different shaped magnets create different magnetic field patterns all around them), and how it moves past. This is really important when it comes to practical applications: you need to make sure you use the right magnet and that it moves in just the right way to actuate your reed switch. If you’re using a reed switch as a counter, for example, it should actuate only once each time the magnet moves by (not three or four times, which would give a false reading). If you’re using a reed switch in an alarm, you don’t want your intruder switching the alarm on one second and then off again a second later because you put the magnet in the wrong place!